Hey, everyone! We wanted to tell you about CHKN’s next update, coming August 31st. Details below.

Which also means testers wanted! You can preview the update, give us feedback, and hunt for bugs (there’s a particularly annoying crash we need your help with!) by getting on the Pre-Release build. Here’s how.

We want to bring the ecosystem of CHKN to life. Making the world and its inhabitants feel more alive as you explore, discover, and interact is the focus for the upcoming update. Here’s the vision we set for for creatures…

To bring this vision to life — to make creatures more intelligent and life-like — we first needed to completely overhaul the AI, including the animation system.

Here are some sneak peeks of what we’re working on for this month’s update. (Try them out right now on Pre-Release!)

Creatures can see & hear the world around them.

You’ll notice this the most right now with creatures in combat. They’ll see or hear dangerous creatures approaching and react, or hunt their prey using their new senses. (Wild creatures interact much more now that they’re really aware of each other!) Check out our development testing in the image below. We’re trying to move around the dragon to get out of its line of sight (the yellow) and hide, but you can see it tracking us so we can’t get away.

It’s not that easy to hide from a dragon.

Different eyes and ears have different properties so you’ll need to pay attention to which Life Blocks you put on your creature. Chickens can’t see as far as cats, for example. We’ll be updating and tuning a lot of these senses throughout Pre-Release testing (and beyond) so let us know what you think!

You can now tell what creatures are seeing & hearing.

Before, when a creature wanted to “look” at something, it would spin its whole body in place. Like a weird, abominable ballerina. Now the creature can turn its head first, and even individual blocks with eyes attached can rotate to look around. This makes it much easier for you to tell what thing your creature is paying attention to… and then decide if that thing should be eaten, tamed, or gotten as far away from as possible as quickly as possible.

Creatures are smart and make decisions.

We went back to the drawing board on AI so that creatures have clear behavior trees and can think for themselves. Instead of odd conflicting behaviors and buggy interactions (like that 1000 yard stare they’d get stuck in, whoops), creatures now make the best decisions based on everything that’s going on, like nearby creatures, how they’re feeling, hunger, health, etc.. If a wild creature is hungry, it’ll go hunting for food. When your creature is full, it’ll ignore food so you don’t waste resources. Creatures don’t get locked into behaviors based off of their emotional state (like OMGSCARY resulting in skittish running back and forth forever). Instead the emotional state is a modifier and they can change behaviors depending on what they’re feeling. This makes creatures much more dynamic and realistic! 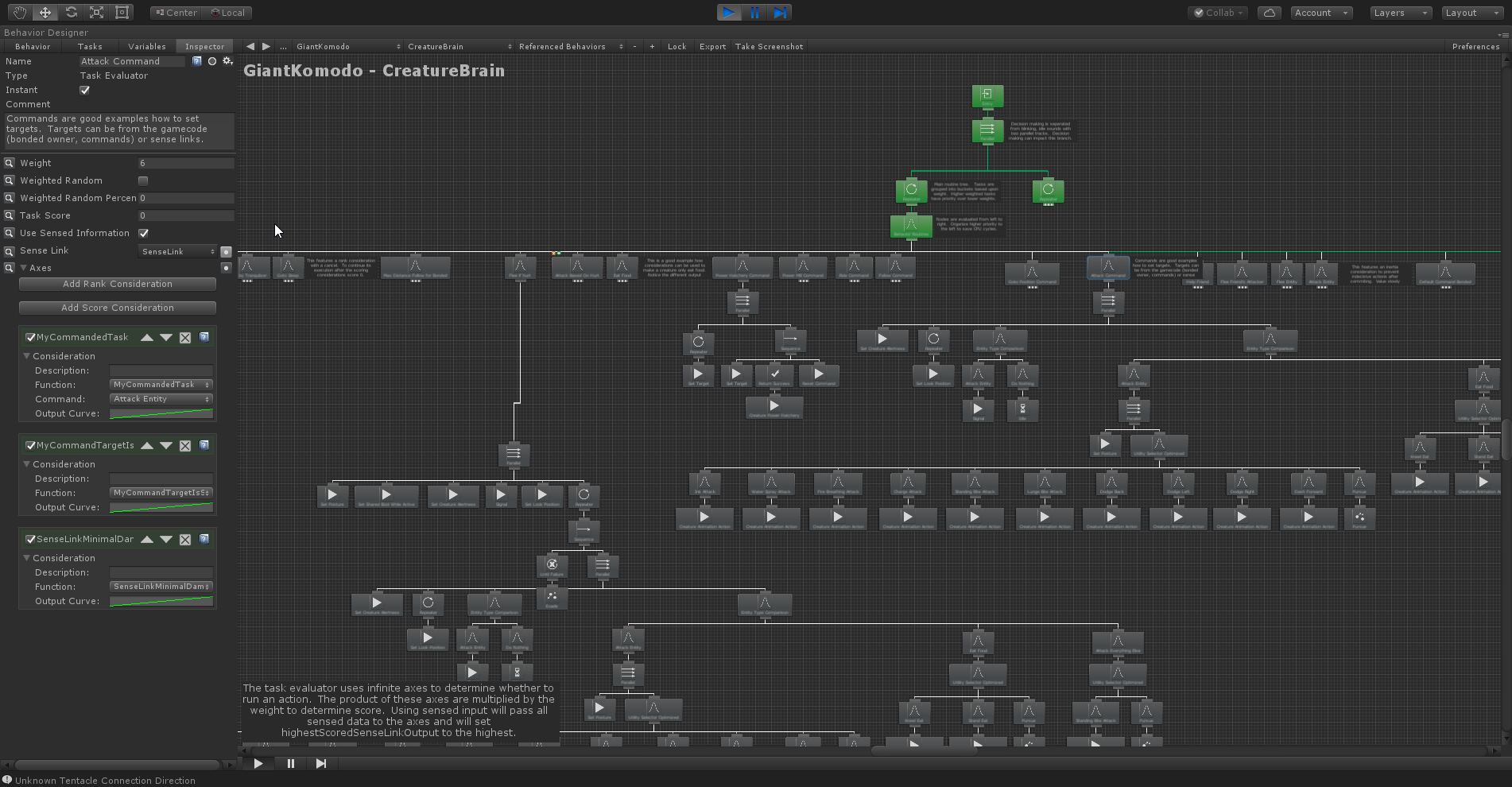 The new brain of a GiantKomodo.

Thanks to the new AI, facing an angry giraffe is now distinct from the stampeding elephant, giving you options when deciding which tactics you want to use. You might try feeding and taming the less aggressive giraffe but you’ll need to strategize to take down an enemy with a size advantage like the elephant (since creatures now have mass and can push your smaller creatures around in combat!). With the new camera in third-person view, you always face your target in a fight so it’s easier to see what’s happening and plan your attacks. And creatures have defined attack animations, so you can figure out their patterns… and then use the new dodge ability to avoid them like a boss.

You can now recognize creature intentions.

Until now, creatures’ gestures and movements all looked relatively the same. You couldn’t tell if a creature was eating or attacking, which is a pretty important distinction when you’re trying to survive in the wild! In addition to being able to tell where creatures are looking (see note above), you can also now distinguish if a creature is eating, curious about something, or is about to bite your face.

You can build creatures with more life-like movement.

With the animation improvements, creatures are closer to being living beings with range of motion and emotion! Walking looks more natural now that feet connect to the ground better, and you can add limbs and tails to your creatures that more realistically bend and sway. They can even have arms now! Arms!

In the future, this lets us add new part-specific animations. Crab claws will pinch! Scorpion tails will sting! Horns will charge! All on our list to come.

We heard a lot from you guys about how creatures would push you around the map when they were overly excited, or how they’d ignore fences so they could chase you down. Not any more. 🙂

Shh… don’t tell him he could just destroy the fence with fire.

There’s a whole new pathfinding solution, actually, which is much faster and improves performance.

Creatures will have more skills.

We asked you about skills and abilities in our recent survey and things like stealth and camouflage topped the list, so we’re making sure to get those in first. We also have unique skills planned for all the creature types, like dogs hearing really well and spiders shooting webs. Thank you to everyone that voted!

With all the creature changes, multiplayer is getting optimized too. We also got a lot of feedback about how being tethered to the host of a multiplayer game is pretty annoying, and we agree. So, if you play on Pre-Release, you’ll notice that the tethering is now gone and you can roam freely. However, be warned, there will be lag and performance issues in multiplayer games, especially as you add more players to a game, while we’re working on it.

Help Us Test on Pre-Release

We really appreciate any bug reports and feedback you send our way to help us test all these new systems. As we’ve mentioned, the update is available now on Pre-Release! (Here’s how to get it.) We’ll be updating regularly as we add more improvements and fix any bugs you help us find before the release on August 31st.

Speaking of bugs, there’s a crash we need help chasing down! If you experience the crash on Pre-Release, it would help immensely if you could tell us where you were on the island when it happened and what events happened leading up to it. We’re collecting data in this thread. Thanks in advance! 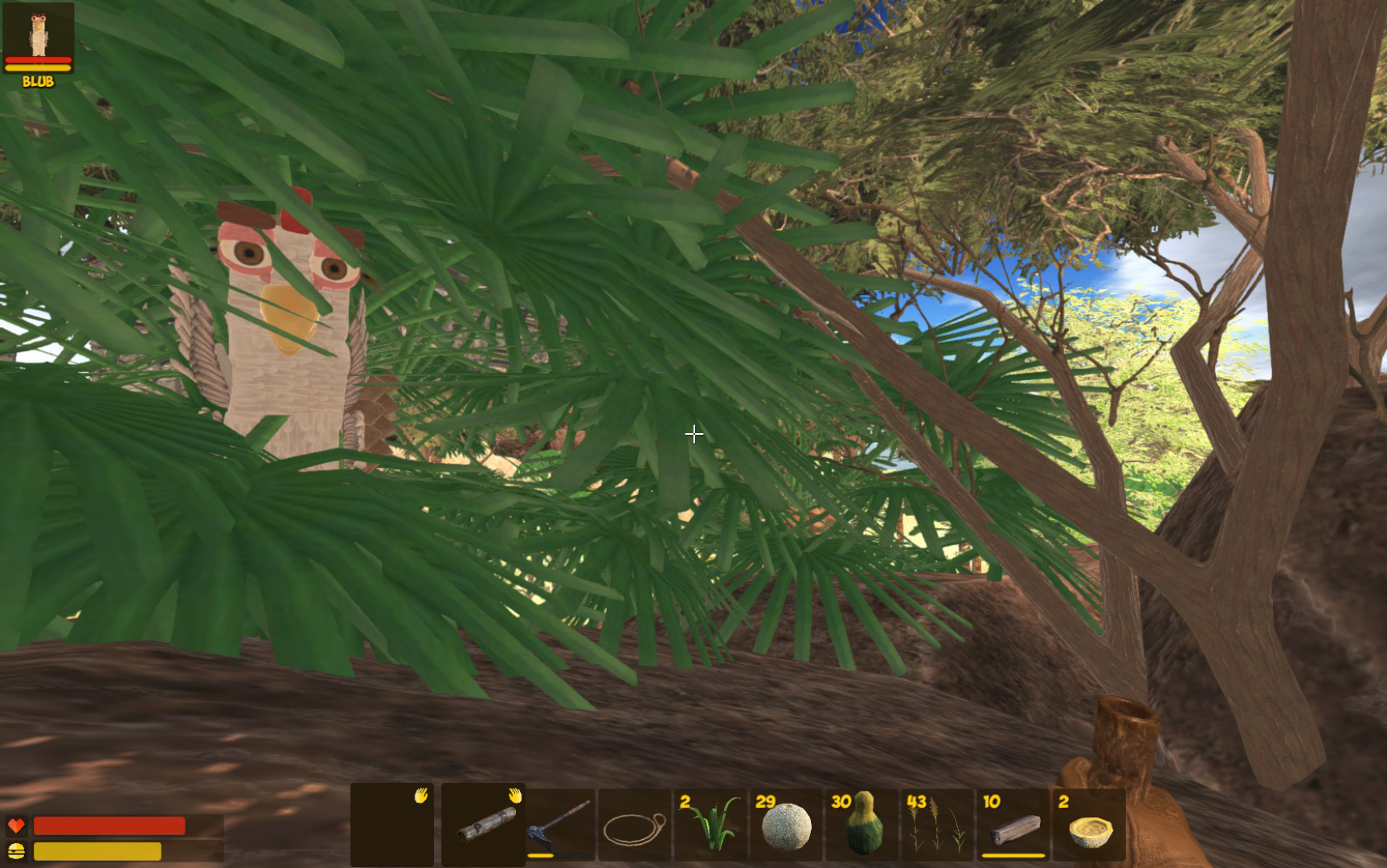 “It’s watching me…” by Reimasa

Don’t forget to join us on YouTube and Twitch for our dev streams. The next one is this Friday, Aug 18th, at 1PM EST, where we’ll be showing off the new animations, updated combat moves, and other improvements we hope you’ll like.

If you haven’t yet, be sure to check out our last developer live stream too. Greg and John talked a lot about the upcoming release and answered some great questions from CHKN fans. (Also, spoilers, Greg gets scared out of his wits by a snake.) You can watch the full stream or check out the handy 15-minute edited version:

You can also sign up for our newsletter to be the first to know about upcoming updates, sneak peeks, live streams, and other super secret CHKN news. 👀

Thanks for reading. We’ll get back to work so we can get this update out to you on the 31st.

Have a great weekend, everyone!