Hey CHKN Army!
Can you believe that the summer is almost over? We hope you all had a great one!

As we transition to fall, we want to give you guys a roundup of what we accomplished during the summer and what we are working towards.

Summer was a busy and exciting time for us. After our launch in Early Access April 1st we began cranking out content and fixes almost twice a month, sometimes more. Here are some notable releases:

Besides the work we have been doing on the game, you guys have been hard at work too! We saw tons of Let’s Play videos, Fan Art and Screenshots being made over the summer which inspired us immensely. Team Twitch Streams became an important part of connecting to our players, and it continues to be one of the funniest parts of our work week. 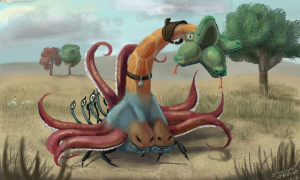 Now that we have gone on our vacations and come up for a breather, we begin our production planning for the next several months, which we will update you on next week. We are taking a break from frequent content additions as well and are hunkering down to tackle both lag and multiplayer. We will have a significant optimization patch to improve game performance and lag some time later this month. If you missed it, we wrote a Dev Log last month updating you guys on our plan for it.

Thank you all for your continued support! We encourage you all to keep creating and keep showing us your crazy creations.